I know that the last two months have been relatively 'heavy' themes and it would probably make sense to make November's theme a little lighter......

I tried. Honestly I tried.

I figured I'd pull two songs at random that I have saved on my XM and use their lyrics as the theme. So I pulled up my List, closed my eyes and scrolled.


Not exactly light. But pick one and have fun with it.

October Theme - You, the Killer

First of all, I want to say thanks for the absolutely powerful entries from September. There was some writing there that really represents the best of what the Scheherezade Project can be. I was honestly overwhelmed by the honesty and visceral soul-searching. I know you guys didn't owe me anything, so I really appreciate you coming through like that.
Even though that month has past, feel free to finish anything else that you may have started and drop in in there.

So for October, let's write (hopefully) fictional stories about you killing somebody else. It could be accidental. It could be deliberate. It could be a complete stranger. Or it could be someone that you're intimately familiar with.

Thanks in advance for your help with the Project.

September Theme - Things We Don't Allow Ourselves To Want

I've been a big fan of the Scheherezade Project for a long time. I think it was an inspired notion of Trista's to establish a forum where people of all ages, pursuits, ideologies, etc can put their own unique spin on a common theme. Most of the time, we surround ourselves with the same people/ideas/convictions/emotions. It was brave of Trista to put something together that would challenge that.
But now her baby has started to languish a little bit. I'm just as guilty as anyone - I'll read the monthly theme and make a mental note to write something up. But then...?
Nothing.

So I'm going to do something about it. I'm going to hound each and everyone of you until you contribute. I'm going to beg, plead, pester and even blackmail. You'd be surprised how much I can degrade and humiliate myself to get what I want.

And I'm going to ask a lot from you.

If you're going to contribute, I need it to be personal. I need it to come from a place you don't show to even the people closest to you.
If that's too much for you to post, you can email it to me and I'll post it anonymously (no speculation as far as whose is whose shall be permitted).

Write about a time that you thoroughly embarrassed yourself.

This month's theme comes to us courtesy of Soleil. With Harry Potter Mania upon us--the 5th movie releasing on 7/11 in the U.S. and the last book making its appearance on 7/21--it seems appropriate to do something related to the Harry Potterverse.

You can write your ideal ending. You could do a 'ship story. You can do a detailed character sketch of one of your favourite characters. Go wild. Have fun.

Find a photograph of someone in a magazine, or in the newspaper. Find a news story that intrigues you, but doesn't tell you many details. Or do some people watching while you're having lunch or getting coffee.

After you've picked a person, flesh out a character sketch or a short story or a poem about that person.

If your source of inspiration is from an online news story or photograph, be sure to link to it. And when you've finished writing, come back and leave a link for your item so we can all ooh and aah at how marvelous you are!

We haven't used a photograph as a writing prompt in a while. There's not going to be a drawing or anything, but you'll still find plenty to write about when you start with this poignant photo. 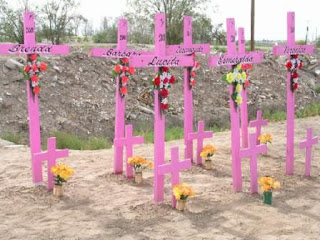 I've been hard at work on a project for MoMentuM about the murders in Juarez, and I found this photograph one day when I was doing some research. There are hundreds of photographs like it--photographs of pink crosses have become the standard symbol when one is talking about the murders in Juarez. I feel like I should apologize for posting a photograph on such a somber topic. But the stories need to be told. These women need a voice. I hope that as you give them a voice you can connect with them for at least a little bit. It's been an amazing project to be a part of.
// posted by Faith @ 6:57 AM 5 comments

seducers of the muse